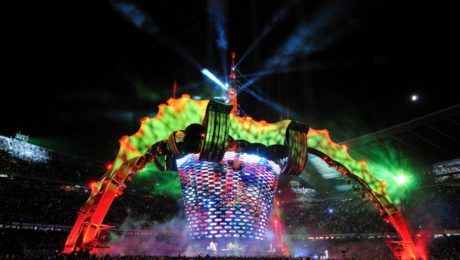 Ever heard of the band U2? I’m sure that you have.

They have held some breathtaking concerts worldwide over the last forty years, but when I think about their most spectacular shows, the  360° Tour always comes to my mind.

Back in 2009, U2 held their most extensive tour yet with tickets for over 100 shows selling out within minutes.

While their performances were unforgettable, a major component that will forever live in people’s minds is the iconic stage structure, appropriately called “The Claw.”.

As part of the stage configuration, a large four-legged structure was built above the stage, with the sound system and a cylindrical, expanding video screen on top of it.

This circular stage, situated in the center of each venue the tour stopped at, increased the audience capacity by up to 25%, leading to attendance records at over 60 venues.

At 51 meters tall and requiring over 100 trucks to transport, navigating “The Claw” between venues required high levels of coordination and planning.

In a similar vein in 2015 ARAM was tasked with designing and building the Intel Extreme Masters Katowice stage for ESL. Probably the most iconic and unique stage in esports, at the time, this was a major change for the esports industry, which had never seen anything like this before, and is still used by ESL.

While the game itself and the emotive highs and lows it brings about are essential elements of esports tournaments the fundamental draw, in my opinion, is the entertainment! In the same vein, U2’s music will live on but the memories from their 360° tour are seared into people’s minds from the entertainment value drawn from this event and the unique stage played a pivotal role.

You can always make a simple design with a big screen and focus on showing the game, but it’s the shape, special effects, lighting, and custom-made opening ceremony, graphic animation of the stage that make it a show to remember. All these details intertwine to create an atmosphere that feels utterly unique and it’s this critical factor, this wow element, that will bring more non-gamers to the gaming world. Some of them will purely be focused on watching the game, but many of them will come to feel the atmosphere, watch the show, and be entertained! RM