ARAM was responsible for the design and technical production of largest gaming event in the world: ninth edition of the World Final of the Intel Extreme Masters .

For the second year in a row event was held in Katowice, this time was spread to two locations – Spodek and the newly built International Convention Centre. Event broke all records of audience and visitors. Soon we will know the official figures, but said more than 100 thousand of visitors and millions of unique visitors following the games online.

The event lasted for a total of four days, and ARAM responsible for the design and its implementation: production, full logistics, executive oversight and implementation.
Our company has several years of successfully producing events „from design to effect” where we provide comprehensive solutions and technical site with full support in lighting, multimedia, design and sound.

Our work began many months before the show, says Michael Mrzygłocki, ” we where responsible for the execution of the set design of projects for all 3 stages. ” The project worked closely with both the client and the executors, among others, Jack Van Daniels.

The resulting total of three scenes, including an impressive main stage with total span of 60m, located in Katowice Spodek. Two smaller scenes with a span of 12m and 16m respectively, and buildings for over 20 exhibition stands, which stood at the International Congress Center. Multitude of places that served by ARAM and a huge amount of equipment that arrived in 16 trucks meant that this year’s Intel Extreme Masters is a big logistical challenge but also a huge success!

At the same stand was used in 1000 meters of trusses and countless number of elements of different types and over 400 LED devices such as wash and strip and illumination. On the two smaller stages were used nearly 70 different types of lighting fixtures, and among them heads such as the Vari * Lite 3500S, Clay Paky sharpy, Fourlight FL-600. 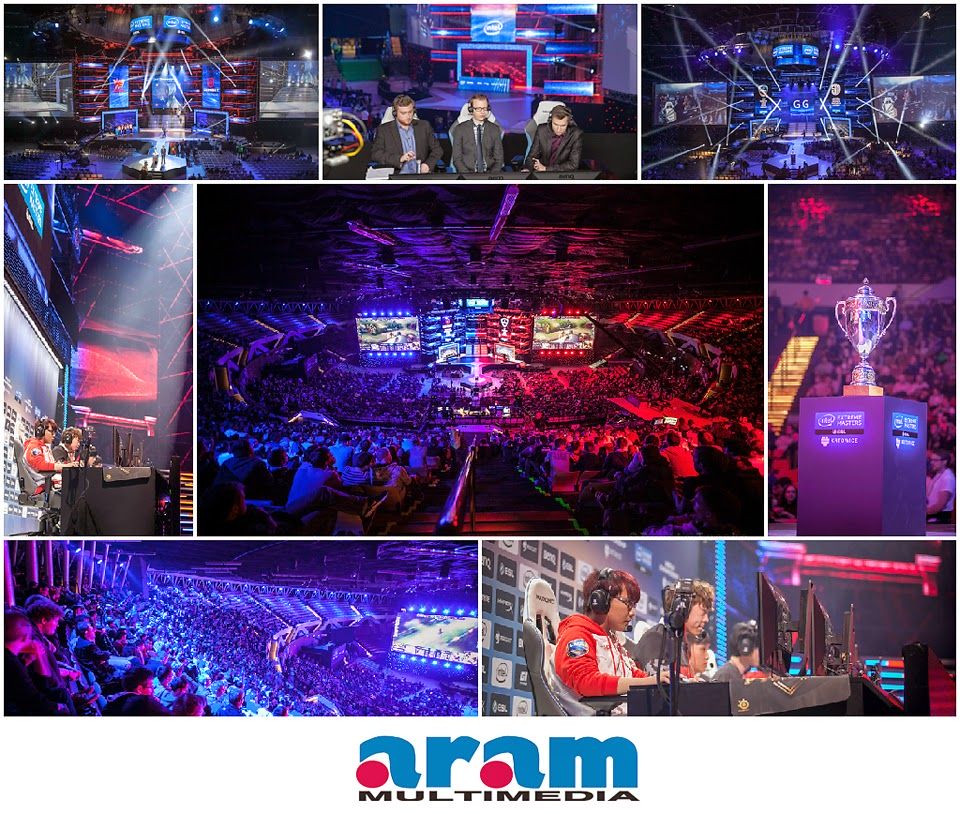 The whole system was controlled by GrandMA 2 and the whole show was programmed and implemented by Wojtek „Koper” Koperski , which is already the second consecutive year he worked on behalf of this magician-production.

Multimedia is primarily two huge projection screens 15,5×8,5m every where projections were made using Barco projectors connected HDF Barco HDX W26 and W20, which gave a total brightness of almost 50 000 ANSI lumens. In the main stage were used LED Grid, Curve-8, Flex LED, LED screens from Fourlight – with a total area of ​​almost 200m2. Moreover, the horizontal lines in the stairs and in the central part of the video lines are made of Hi-Strip, with a total length of over 300 meters.

PS Here is a spontaneous thanks we received from the client .:
What can I say. Working with ARAM is primarily a pleasure. 🙂
Thank you for pro-active behavior and implementation of all of our requests.